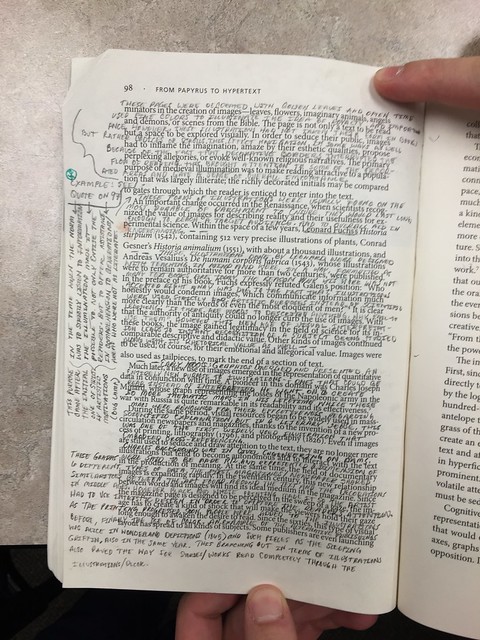 When I first started using a traditional wiki (c. 2002, I think), I mistakingly saw it as a form of wide-ranging publication – a hypertextual companion to the blog. I was looking for a universal notebook-cum-database; a one-stop shop for drafting, revising, and publishing; a elegant – because it was the smallest database that would work – hypertexual support system; the realization of Vannevar Bushâ€™s memex and Ted Nelsonâ€™s literary machine. I thought of the wiki as a magic workshop: a place where I could collect and store and organize hypertexually my notes, commonplaces, links, and drafts; with a workbench space to assemble these things into more formal hypertexts; and the capability of publising those hypertexts in progress. A universal reading and writing and learning and broadcasting space.

Iâ€™m borrowing the idea of coterie culture from Laura Mandellâ€™s recent monograph Breaking the Book. She sets coterie culture next to more contemporary print cultureÂ in orderÂ to highlight the meeting of scribal and print cultures in 17th and early 18th century England. Coterie publishing of small print runs circulated among a small group of readers â€œwith the same expectation as manuscripts: educated, elite readers would write in them, correct them, modify themâ€ (121). Sound a little like fedwiki? Breaking the Book is worth a read. (I could notÂ find any good reviews of the book yet, so hereâ€™s a link to the publisher, Wiley Blackwell.)

Thoughts along this line are circulating in the fedwiki neighborhood as Fedwiki as Memex-Journal. The memex was designed to address the problems of wide dispersal of information and the index. As itâ€™s being discussed on Fedwiki, the problem of integrating sources is being addressed with links to collections and notes on Pinboard, and the problem of indexing is address with RSS feeds and tags.

Once I have the notebook and coterie distribution in mind, the advice behind a style guide, like this one Mike Caulfield designed for Fedwiki, becomes clear. The guide listsÂ the usually unstated practices of the coterie: the Fedwiki neighborhood.

Make docs and some images available from a desktop and laptop to iPhone for reference and for use in classes. These are mainly rtf notes, but I’d also like to access to pdfs for articles.

I keep my course and research notes in DevonThink. They get into DT in a number of different ways, but I work on them mainly in DT.

Ways to go about it

I’ve eliminated a few utilities that I’ve tried (DataCase, Air Sharing, NoteBooks), which seems to leave me with two options.

OneDisk. Accesses iDisk files and folders. Needs MobileMe. Clear interface, landscape view. Can email files from the app. No luck reading a Numbers page, but it’s supposed to. The pdf reader is as good as any. Can set bookmarks and create folders.

Briefcase. VPN, I think. Uploads and downloads from phone to computer via Bonjour. No desktop utility needed. Can access any folder on the computer. Interface similar to that of OneDisk. Landscape view. Reads the usual suspects.

In both cases, getting files onto the phone requires some planning – nothing major, but planning akin to – and no less hassle than – printing out the notes. Planning means forgetting.

Using OneDisk, files have to be uploaded to iDisk from the computer, and then downloaded to the phone. Upload times can be a longish for larger documents. Upload now; download later.

With Briefcase, files have to be loaded directly to the phone using the phone near the desktop. Transfer now. Read later.

From a step back, the whole idea of moving notes to the phone for reference in class seems about the same as printing stuff out.

Even worse. The problem isn’t just in transferring stuff but reading it. Unless they are formatted with screen reading in mind, notes are difficult to read on a mobile device. Pdfs are just too difficult to read on a small screen. Pdf is for paper. My best luck so far has been with some rtfs – using 14 pt Helvetica, which is what I use when I print out the notes.

What I need – when going from desktop to phone top – is an app that will reformat .doc and .rtf files for reading on the phone.

And that might lead back to Instapaper. It’s the formatting and the local storage that help.

Then there’s the consideration of going the other way: from the phone to the desktop.

Makes me want to just make a paper notebook (video) -but my handwriting is unreadable and, well … Paper, that just defeats the whole purpose, doesn’t it.

On a long roundabout tour (reading up on using twitter, originally) I bumped into a teaching technique by Jason B Jones on The Salt-Box :: Wikified class notes.

Class notes themselves are epistemologically weird. Usually, we think of notes as private, but if theyâ€™re *too* idiosyncratic, they might not be very accurate, or very useful later in the semester. What would be useful is a set of canonical class notes: This is what we agree happened on this day in class.

I’ve had good results with a similar exercise in College Writing II, having groups of students develop definitions, as well as locate and create examples of rhetorical appeals. My exercises aren’t as neatly structured as Jones’s, but I’m in class while the students are working to oversee how they are doing and provide some scaffolding.

As Jones finds, the first results are pretty cutandpaste: copy from the book and paste it in. It takes some time for students to move past the found object, processed information and more towards their own developing understanding. Over a few weeks, however, they begin to see the wiki – and the web and the book – less as a repository and more as elements in their writing space.

I’m not sure what drives this change, however: what moves students past recitation and towards consideration. What’s interesting is that we can see it happen on the wiki by paging through the revisions and refactoring.