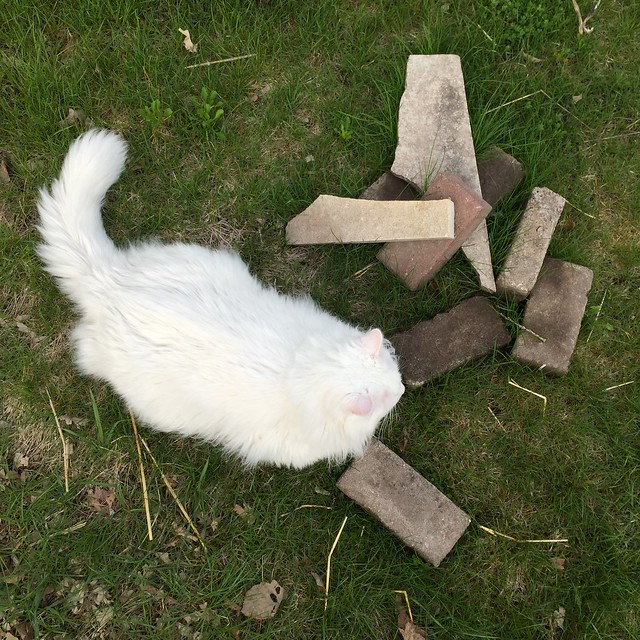 Mike Caufieldâ€™s latest post about FedWiki reminded me to get my finger out and start thinkining about how we might link in FedWiki. I started to in an earlier blog post, so hereâ€™s a continuation.

First, a synopsis. Keeping links separate from the content has been a long-standing idea but rarely practiced on the web. As the web came into being, we started to add links to content in such a way that understanding the content becomes dependent on following the links. This is signaled by how we tend to embed links into the syntactic flow of sentences. So in my opening statement, I signal two directions for understanding by linking the phrase latest post about FedWiki. First, you can read on without reading Mikeâ€™s post and (probably) will be able to follow whatâ€™s coming next. But the link also signals that youâ€™ll want to refer to the post I linked to if you really want to understand what Iâ€™m going on about.

This is the way we have learned to link, the way we have taught people how to link. “Embed those links, gang. Make them follow the sentence, but also write so that readers do not have to follow the links to understand you.” Iâ€™ll leave it to you to search for the web writing advice on linking, both hackneyed and sophisticated.

Wrong. As Pound wrote, â€œWrong from the start – No, hardly, but, â€¦ â€ (Hugh Selwyn Mauberley, if youâ€™re interested.)

Mike reminds us, by re-considering Bush and Englebart and Nelson, that we can re-think this idea of linking in the text.

[L]inks as imagined by the heirs of Bush â€” Engelbart, Nelson, Van Dam â€” formed a layer of annotation on documents that were by and large a separate entity.

Links as conceived by Bush are separate from the document: annotations, trails, value added, paratextual â€¦ By being links, they specify that they lead to other material outside the immediate text, not material that is integral to the text weâ€™re reading. Thatâ€™s what the link means: this is an annotation, a supplement to what I am offering here.

This doesnâ€™t necessarily make links merely suppplemental. Thereâ€™s no merely about it – any more than the paratexts of novels or articles are merely extra. But it does place links on an independent layer. I want to explore this idea of independent in more detail some other time, but for now Iâ€™ll say that the document can circulate without the links an still be understood. The links add but the document doesnâ€™t depend on them. By the same token, the links can circulate on their own and, very likely, mean something, if not the same thing as they do when circulated with the document. Paratexts.

So you can link your history of the Polaroid ID-2 camera up to suit the engineering people, or to suit the history of corporate boycotts people, but you canâ€™t set it up the links serve both without overlinking the crap out of it.

Upshot: For all the breadth the web and hypertext promises, it is still limited by single authors getting their stuff out there as their single perspective. To develop multiple perspectives in a single documenbt using links to other content would overload the text and send Carr into even more neuro-cognitive apoplexy. For the rest of us, it would just be really really hard to read. (That reference to Carr is an old-fashioned link: an allusion. It serves a rhetorical function in my post, arguing that what Iâ€™m talking about is not what Carr is talking about.)

The thing is, weâ€™re not talking about just links here. Itâ€™s about the entire system of which the link is only one element.

To recap, even with links, the document will present “only one valid set of relationships, inscribed by the author.â€ Ok, so now we get to the core:

Federated wiki deals with this issue by keeping links within the document but letting every person have as many copies of that document as they like, with whatever links they want on each. Itâ€™s a simple solution but in practice it works quite well.

Think about that a moment. It means one person can fork and consequently work with three or four or howevermany versions of a document. There may be little point in keeping exact copies (but who knows). There may be a big point in keeping an original (as in the sense of the first version to be distributed). But itâ€™s the other versions that make things happen.

I’m not talking extreme differences so much as potential versions of a document that can still be identified as that document.Mikeâ€™s version with his annotations. Wardâ€™s version with some of his annotations. My version with some of Mikeâ€™s annotations and some of Wardâ€™s, and some of my own. I donâ€™t actually need to maintain three copies. The fedwiki does that. I fork Wardâ€™s or Mikeâ€™s version to my fedwiki and adds what I want, move paragraphs around, add other stuff to create my own version. If I need to, I can see who added what. If the new version is going to depart too far from the one in circulation, I start a new document.

Hereâ€™s how it might look, and is starting to look:

In the newer style, content is kept fairly short, and fairly link-less. But at the bottom of the articles we annotate by linking to other content with short explanations of each link. … People seeing your links can choose accept or reject them. Good and useful connections can propagate along with the pageâ€¦. as federated wiki pages move through a system they are improved, and thatâ€™s true. But the more common scenario is that as they move through a system they are connected.

As Mike suggests, it’s the federation that makes this style of linking valuable, with links accruing as the article circulates through the neighborhood. The design of the fedwiki page facilitates accrual. Each paragraph is a dragable object, which lets writers create an annotated link that can be placed into the stream of an article at any point. A few fedwiki style guide suggestions also help. Links to external content are created using single brackets, and the fedwiki style guide suggests these links designate the kind of content being linked to (blog, video, academic article). Links to existing fedwiki pages are created with double brackets and the exiting page can be forked to the userâ€™s fedwiki. If the writer changes a page, the page is forked by the system so that a writer starts with a copy – her own copy – that is still connected to the other copies in circulation by way of the flags in the upper left hand corner of the page.

What we develop is a neighborhood.

Fedwiki starts look like a new genre, differentiated from other online text genres such as blogs, listservs, sms exchanges – and the more traditional wiki. The orignal wikis asks visitors to contribute to the common document. Fedwiki asks users to fork what they will and create a variation for their own purposes, as well as contribute to the neighborhood. This also means that using fedwiki involves a different set of social negotiations than traditional wikis. That is the subject for another time.

Fedwiki becomes a genre that operates not using multiple authors to create a common document but a chorus of voices each creating a version. Fedwiki starts to look like the place where those authors do their work.

Chorus stems from chora, and chora [khÃ´ra] is a potent term in my field of rhetoric, meaning, variously, the discovery of ideas, the space outside the walls of the city where ideas are born, or as a place of “emerging possibility”. Wikipedia will probably tell you all you want to hear. But if you want the most recent hubbub, try a paper by Michael Souders, “KhÃ´ra, invention, deconstruction and the space of complete surpriseâ€ [PDF].