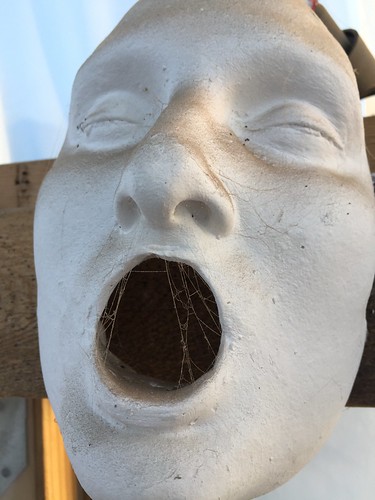 “Plaster mask” by mcmorgan08 is licensed under CC BY-SA

Consider the blog as self-recorded and self monitored voice of a person. From Zero Comments: Blogging and Critical Internet Culture, by Geert Lovink.

The blog emphasizes the making of aÂ writtenÂ record from the oral tradition. Directed at a potential co-conversant, others listen in. Who reads the conversation? Who’s listening in? Who has prying ears?

How do we analyze media of such an informal character? A Weblog is the voice of a person, as Ã¼berblogger Dave Winer once defined it. It is a digital extension of oral traditions more than a new form of writing. Through blogging, news is being transformed from a lecture into a conversation. Blogs echo rumor and gossip, conversations in cafes and bars, on squares and in corridors. They record â€œthe events of the dayâ€. With todayâ€™s â€œrecordabilityâ€ of situations, we are no longer upset that computers â€œreadâ€ all of our moves and expressions (sound, image, text) and â€œwriteâ€ them into strings of zeros and ones. In that sense, blogs fit into the wider trend where all our movements and activities are being monitored and stored. In the case of blogs, this is carried out not by some invisible and abstract authority but by the subjects themselves who record their everyday life. When people are still upset to find that theyâ€™ve been fired after having made critical remarks about their employers on their blogs, one realizes we are still in the early days for the spread of this insight. â€œWho reads my blog anyway?â€ Well, apparently your boss does.

Maybe we should be flattered that the boss and what the boss represents takes the time to pay attention to our personal recordings. At least the boss reads, and not just 0s and 1s , but reads words that formÂ meaning.Â Or is read to.

ButÂ we’re getting ahead of ourselves. FirstÂ consider the recording side because first comes the recording. Â Bloggers record their subjectivityÂ as they course through the day. These events happened. This event of recording happened too, and the recording itself can make something more happen when the abstract Boss reads and re-records it.

When you first hear the sound of your own voiceÂ on a recordingÂ and think, Is that really me? Do I really sound like that? you aren’t listening to what the voice is saying. Do I really sound like that? Really? The modulation of the voice can be changed. Maggie Thatcher did it, shifted her voice down a couple of notches. The changeÂ purportedly made what she was saying more palatable to her listeners, and she became more rhetorically adept. Blogging is a voice coach.Â This is blogging as self-management. This is the wider trend.

Then there’s this:Â blogging is not in vain