This is the new stuff. The truck-stop colonized by the urbanites.

The atrium roof is appealing. You look up a lot. The breakfast bar is loud. The ambience is ritalin-driven. The food is laced with peanut-butter, bacon, and cheese. Cosmopolitan effort. And we feel vey cosmopolitan here. Situated. Groomed. Boys and girls bathrooms, the design ripped from the metro airport. Stainless steel baby changing platform. A common washing space, like a circular urinal. Or font. Or locker rooms. An after-bacon rendezvous. We first held hands in the over-spray at the breakfast bar. A grandparent playlist: Bowie as Ziggy, Blind Faith, Led Zeppelin II. No one’s listening. They are missing the better irony of the morning. Looking up into the atrium’s blue sky.

Simonson’s beats the space for a relaxing breakfast, formica and tippy tables. Top of the heap for desperation.

Getting out was a reprieve. Quieter outside than in. Like leaving a snow-mobile factory for a summer’s day.

Description of German arcades, 1927. in Buck, Dialectic of Seeing

I cannot enter it without a damp chill coming over me, without the fear that I might never find an exit. I am hardly past the shoeshine and news paper stands under the lofty arches of the entrance, and I feel a mild confusion. A window promises me dancing daily and that Meyer without whom no party would be complete. But where is the entrance? Next to the ladiesâ€™ hairdresser there is another display: stamps and those curiously named tools of the collector: adhesive pockets with guaranteed acid-free rubber, a perforation gauge made of celluloid. â€œBe sensible! Wear wool!â€ demands the next window of me [. .. ] . I [ . . . ] almost stumbled over the peep shows, where one poor schoolboy stands, his school bag under his arm, wretched, immersed in the â€œscene in the Bedroom.â€ [. . .] I linger over [. . . ] Knipp-Knapp cufflinks, which are certainly the best, and over the Diana air rifles, truly an honor to the goddess of the hunt. I shrink back before grinning skulls, the fierce liqueur glasses of a white bone cocktail set. The clowning face of a jockey, a handmade wooden nutcracker graces the end of the musical toilet paper holder [. . . ]. The whole center of the arcade is empty. I rush quickly to the exit; I feel ghostly, hidden crowds of people from days gone by, who hug the walls with lustful glances at the tawdry jewelry, the clothing, the pictures [. . .]. At the exit, at the windows of the great travel agency, I breathe more easily; the street, freedom, the present!

GILLES IVAIN makes a call for a new architecture.

We are bored in the city, to still discover mysteries on the signs along the street, latest state of humor and poetry, requires getting damned tired….

We will not prolong mechanical civilizations and the architecture froide that ultimately lead to boring forms of leisure.

Architecture is the simplest means to articulate time and space, to modulate reality, to engender dreams. It is not only a matter of plastic articulation and modulationâ€”expression of an ephemeral beautyâ€”but of a modulation producing influences, in accordance with the eternal spectrum of human desires and of progress in the realization of these desires. The architecture of tomorrow will thus be a means of modifying present conceptions of time and space. The architectural complex will be modifiable. Its aspect will change partially or totally in accordance with the will of its inhabitants. …

A new architecture can only be spoken of if it expresses a new civilization (it is clear that there has been neither civilization nor architecture for several centuries, but only experiments, the majority of which have failed: one can speak of Gothic architecture, but Marxist or capitalist architecture does not exist, although these two systems show similar tendencies and common aims.)

This new vision of time and space that will be the theoretical basis of future constructions, is not in the right state and will never wholly be so before testing comportments in cities set aside for this effect, cities in which will be systematically assembledâ€”in addition to the organizations necessary for a minimum of comfort and securityâ€”buildings charged with a great power of evocation and influence, symbolic edifices representing desires, forces, events past, present, and to come….

In a way everyone will live in his own personal “cathedral.” There will be rooms more conducive to dreams than drugs, and houses where one cannot help but love….

The quarters of this city could correspond to the catalog of diverse feelings that are encountered by chance in daily life….

The principal activity of the inhabitants will be CONTINUOUS DÃ‰RIVE. The changing of landscape from one hour to the next will result in complete disorientation.

This first experimental city would live largely off a tolerated and controlled tourism. Future avant-garde activities and productions would gravitate there of their own accord. In a few years it would become the intellectual capital of the world, and would be universally recognized as such.

FORMULARY FOR A NEW URBANISM. GILLES IVAIN (PSEUDO. IVAN CHTCHEGLOV) From Situationists and the city. pp 32-41. 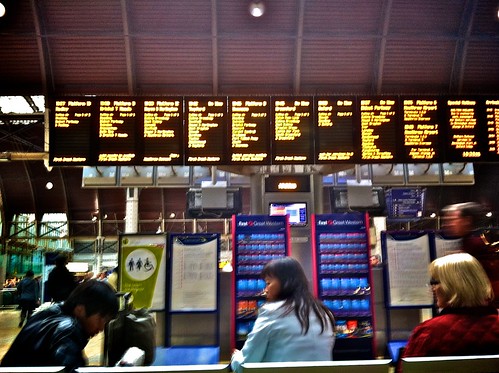 Redesign the city. But keep the rail stations as they are.

– Keep the railroad stations as they are. Their rather moving ugliness adds to the atmosphere of travel, which provides what slight attraction these buildings possess.

– Gil J. Wolman demanded the complete suppression or falsification of all information about departures (destinations, times, etc.). This would encourage dÃ©rive. After a lively debate, the opposition that had been expressed gave up its argument and the project was accepted without reservation.

– Heighten the acoustic environment of train stations by broadcasting recordings from a large number of different stationsâ€”and certain ports.

From PLAN FOR RATIONAL IMPROVEMENTS T O THE CITY OF PARIS 4. Situationists and the city, 70. Adapted to bullet list.